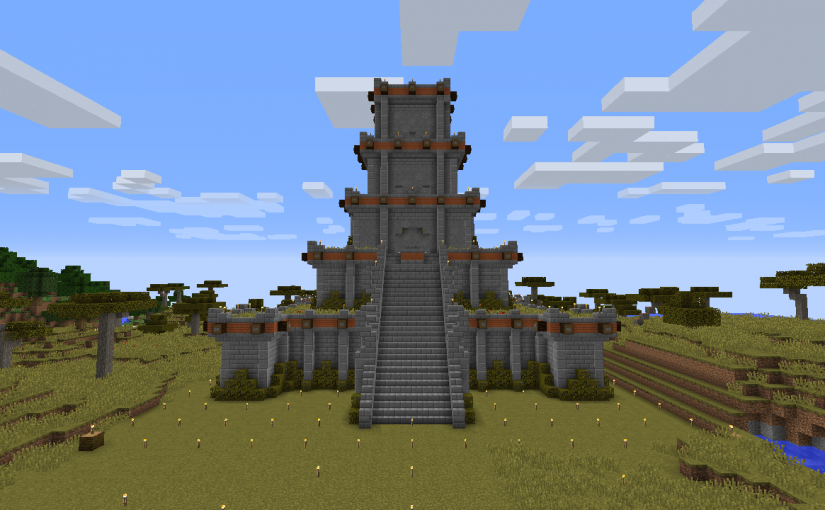 New Lusitania is something I’ve been trying to build since first setting up a family server for me and my sons to play Minecraft. But the seeds go back to my first ever Minecraft world. I spawned on an island with no food. Not understanding boats, I dug down till I found an abandoned mineshaft (lucky!), got some string, and started fishing. Once I felt I had enough food, I set forth in a boat, went straight north and ran into a savanna. So my first real base was in a savanna biome. 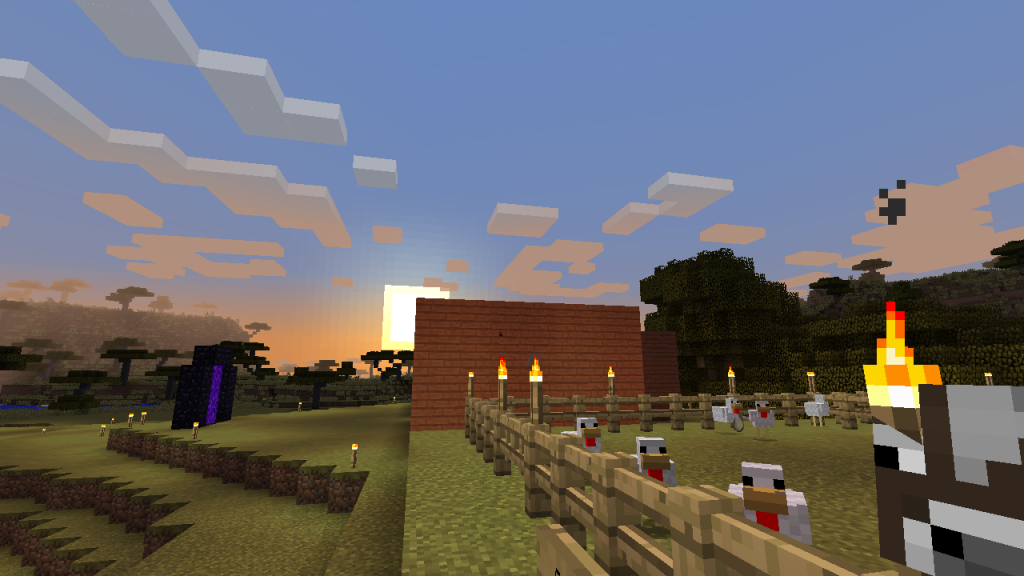 Anyway, months later, I set up the family server. I helped my boys get a spawn city going, and then we each ventured forth to create our own bases. After a bit of exploration I settled on a savanna island northeast of spawn. 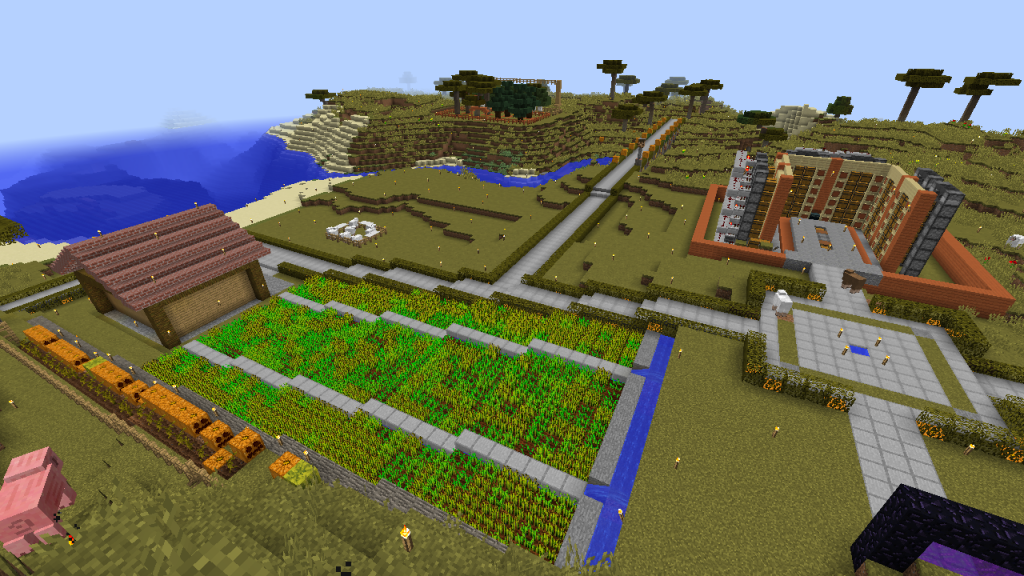 The island was initially populated by a whole herd of pigs. My daughter loves pigs and so I decided to make the island a haven for pigs. Of course, in Minecraft that means it should also be a haven for zombie pigmen. So I began to build my base, thinking it would eventually become an island with a proper palace for the pigmen to live in, and pigs themselves would be protected pets, possibly worshiped by the inhabitants. 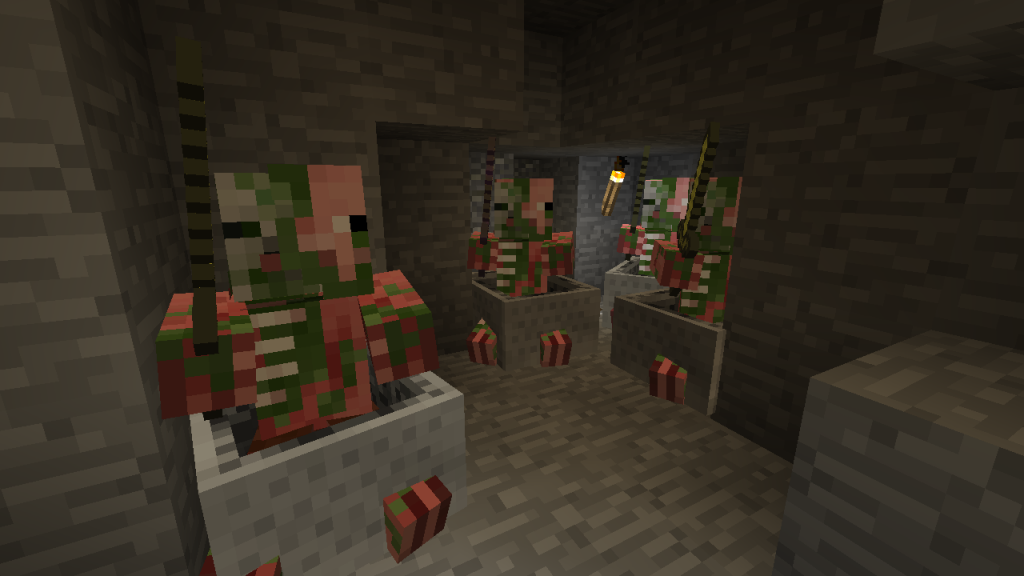 I even named a few pigmen that spawned from my nether portal and set them aside to populate the island as I built things up. Unfortunately, my kids lost interest in the family server before I got very far, and I burned out on Minecraft for a couple months.

When I came back, it was to play hardcore solo games.

After a couple failed attempts at hardcore, I tried one with large biomes. I slowly built up a small home in the large savanna biome where I spawned. It ultimately became the first hardcore world in which I beat the Ender Dragon, and later defeated a Wither as well. Before eventually losing interest in hardcore I had built myself a gold farm in the overworld, and once again had zombie pigmen spawning in my savanna build. 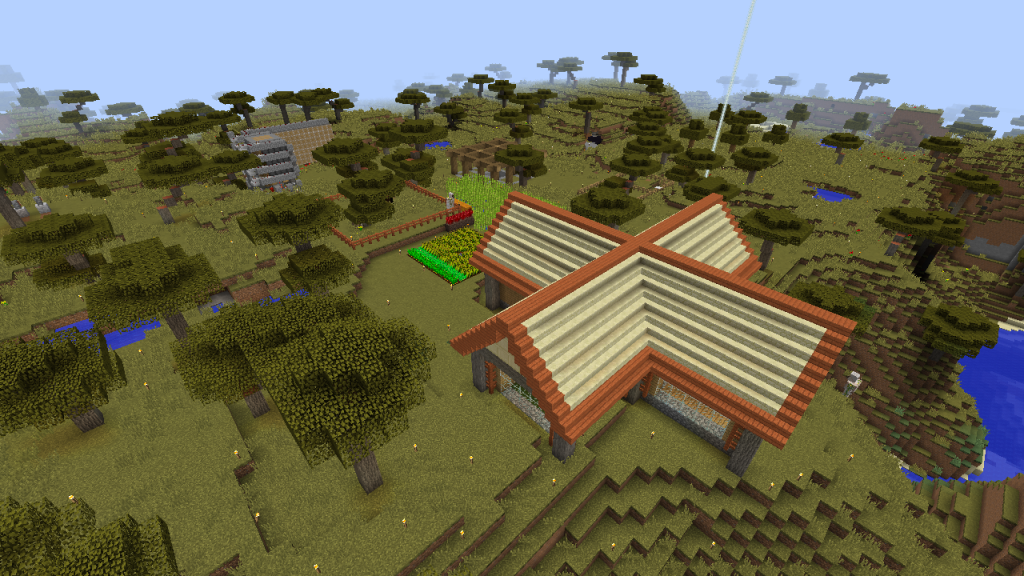 Later, while playing with Iberia, I respawned once in a savanna with a village next to the ocean. Over time, I started building it into a beautiful little town, by limiting myself and slowly fleshing out all of the buildings a proper town would need. Though I didn’t think to resurrect my idea of a pigman village at the time, I once again found I enjoyed building in the open landscape a savanna provides. Eventually I died, and in Iberia that means losing my build until I could stock back up and do some serious exploring. So a third attempt at savanna building was abandoned. 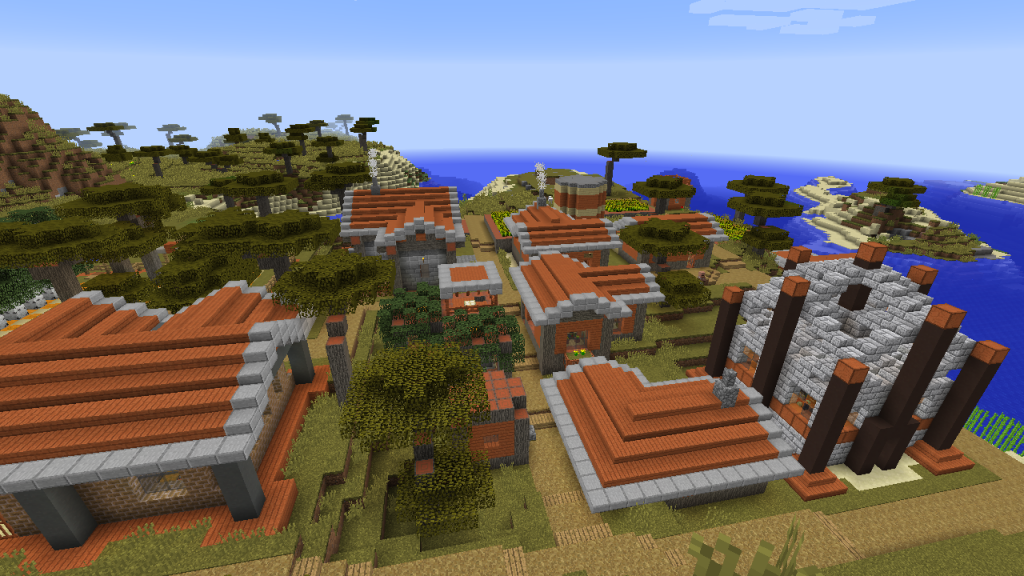 But by this time, the idea of a Pigman Empire sprawling across a large savanna biome had captured my fancy. It lets me tell a story about why villagers are trapped and kept as bait for iron golems that are instantly killed. You see, the zombie pigman empire is a martial one, built on the oppression of villagers, who are kept as slaves. Some are forced to trade, others are used in iron farms, still others are forced to breed more villagers. 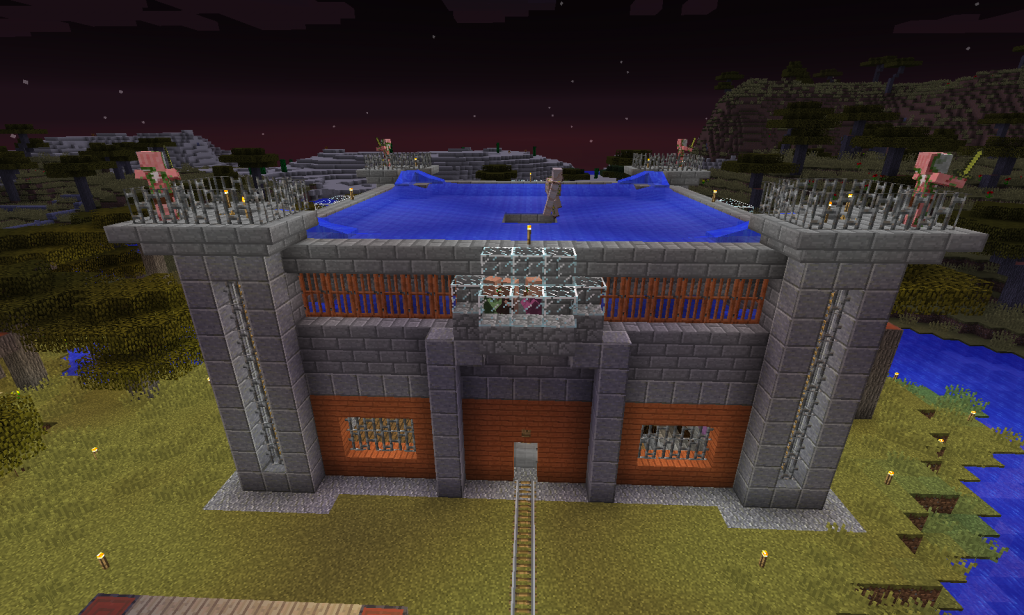 I wanted to do it right, and I wanted to share it with others who could appreciate it properly (sorry, kids). So when an SMP server I had played on a while back decided to reset (Hi ChickenPieCraft friends!), I knew that it was time for the Pigman Empire to be born. I also knew it needed a name, so I adopted the name “Lusitania” from Speaker for the Dead (a book about an alien race of pig-like creatures who live in a world that is essentially a large savanna).

I didn’t want the idea to fizzle out, or for me to get burned out, so I knew I needed to approach it differently. Documenting the progress in the blog is part of that. Playing on an SMP server is part of that, both so that I have a small audience, and also so that I can take advantage of the farms that others build to not have to grind as much. Fleshing out a bunch of different ideas up front was part of that. But also taking breaks as needed. Breaks like building the witch farm. There will be others as I go, which is another benefit of playing multiplayer. 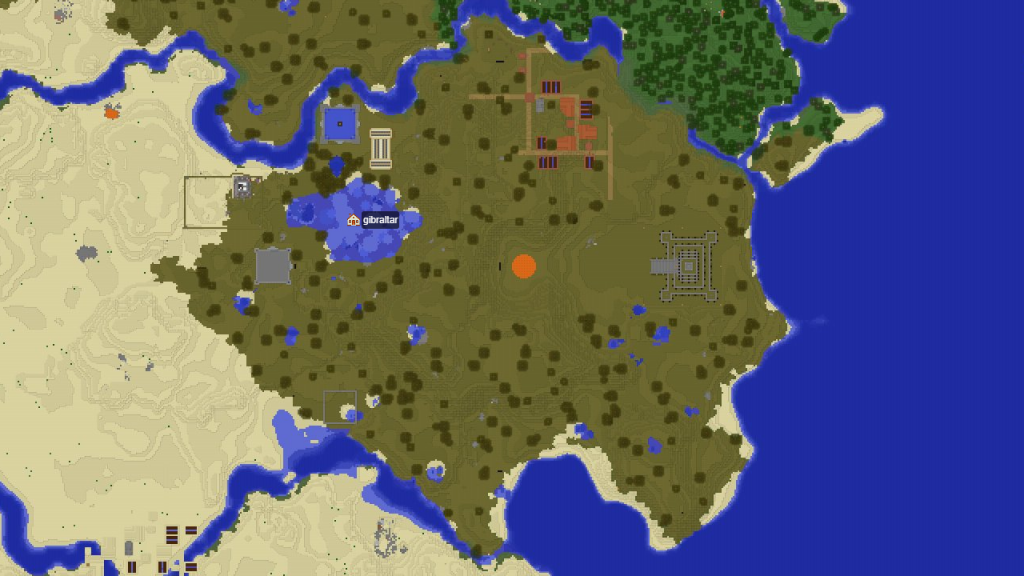 New Lusitania is still a small empire. It has a protected iron farm, a stone quarry, a sugar cane farm, a nether hallway branch, an almost complete automatic tree farm, a wheat farm, and the outer structure of a palace. There is still a ton to build: the main village, two+ more iron farms, a port on the south side of the island, barracks, fleshing out the palace inside and out, gardens, a dense savanna forest, a proper mine, a cow farm, and much more. It will also have an embassy building at the server city.

Stay tuned and I’ll work to give more regular updates on the progress.