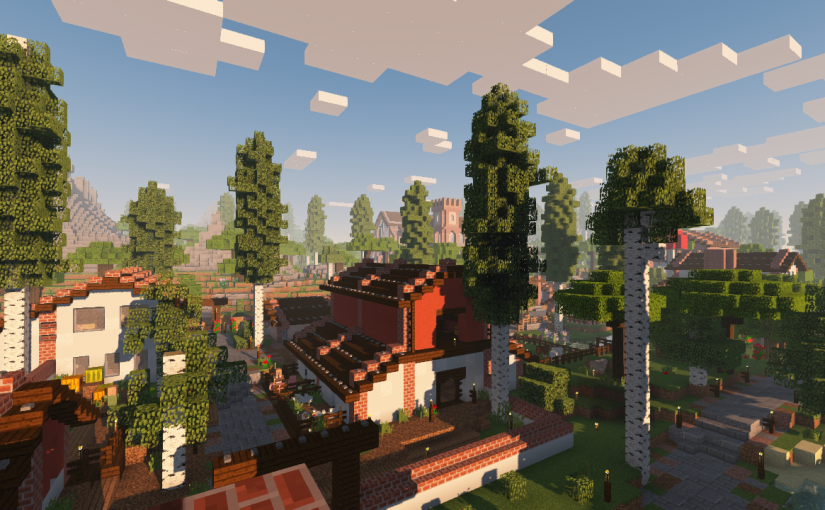 That felt good to write.

And here’s an imgur album with all kinds of goodness packed in.

For all the posts about Navarre, see the page.

I’m trying to get better at finishing things. That requires deciding what “done” means. Then getting there. Then stopping.

At that point, it’s fine if I want to do another project that builds on the first one, like a season 2. I did that with Iberia. And there may be a 3rd season of Iberia, once Forge for 1.13/1.14 becomes stable enough.

But the point is that finishing projects is an important habit to get into. It allows you to change direction, without being directionless. Finish a project, wrap it up, tie it in a bow, and then move on to the next project.

What more would you do?

If I were to do a season 2 of Navarre, I would add at least one more district to the village. In addition, there are things I would add to each existing district: an archery range to the university district, a meat and fish market in the market district, separate armor and weapon stores, automated farms in the industrial district, etc. For the new district, I could go with a royal district and add a castle/keep for the political class, or maybe an entertainment district with a playhouse, tavern, and music store.

Overall, I don’t think I’ll do a season 2. This is one of those projects that I’m really happy with on the first pass. Like any project, it didn’t end up being quite what I envisioned at the beginning. It’s both more and less. And that’s ok and normal.

So, if I don’t do Navarre season 2, what is next? Well, I have a few things I’m thinking of doing. The first is a break from Minecraft. I love it, and know I’ll come back. But I’d like to try a play through of Factorio, especially if the devs can get version 0.17 out in time. When I do come back to Minecraft, I’m leaning towards doing something more creative than survival. One approach I’ve considered is creating an OTG preset to work those creative muscles. I love what the OTG guys have done with BiomeBundle and the new realistic preset they’re making. I enjoy these city/village projects, so I’ve considered working to create an alternate preset that includes large cities that I design. Not sure that will be next, but the idea intrigues me.