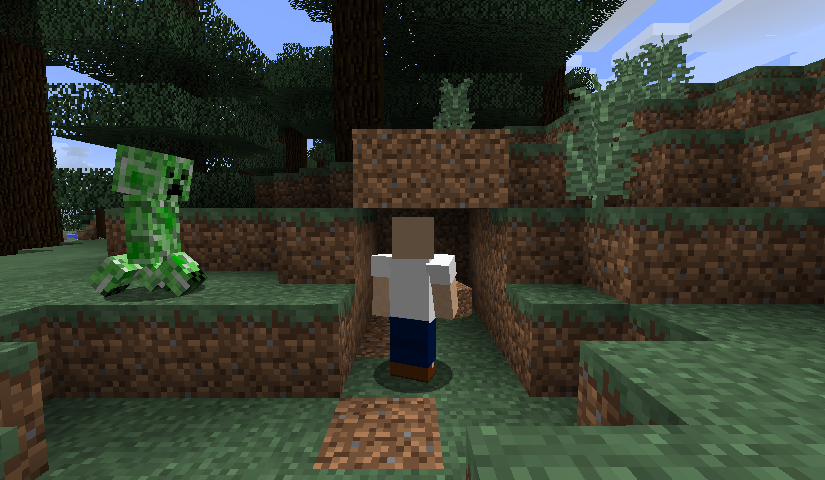 Let’s play this scenario out a little further. Let’s imagine that Iberia were baked into Minecraft and when you started you could select the easy introduction (vanilla) or the challenging introduction (Iberia). People like my thirteen year old son would choose the challenging one, just because it’s a challenge. And at that point he is dropped into a survival world with all of the challenges Iberia adds on top of that.

And so, of course, he would die. But first he’d knock down a few trees, build some tools, maybe even create a hidey hole. But within the first day or two, he’d be dead, as a new player. He’s not even going to face the challenges of finding your way or slow crafting with armor. And without natural regeneration, he may not even get to mining enough to experience hard stone. And so, he dies, the spawn point is changed and he respawns (reincarnates?) in a seemingly new world. At the start of a new day, though he may have died at night. So he now gets another 10 minutes to learn better how to start a new life in Minecraft. He’ll get further this time around, maybe even build a place to survive the night. But if not, he dies again, and gets more practice.

This repeated practice of the first day is a way better experience than my first attempts at Minecraft. Sure, I made it through that first day, and then died early in the night. And respawned in the dark. Then I had to run around blindly in the dark, hoping I could maybe find my stuff, but in reality just dying a couple more times till it got light again. Then getting a new start. But not really learning how to start well.

True, the new player using Iberia would likely repeat that first day experience more times because of the need to sleep to heal. And that could get grindy and annoying for a new player. But once he can survive through two or three nights, he’s got the basics down. Sleeping to heal will force the new player to do more early work during the day and he’ll have more time to build a home and base with early game materials (wood, dirt, grass, sand). Over time, this home base will be expanded and rebuilt using stone and other materials, giving him a greater sense of accomplishment.