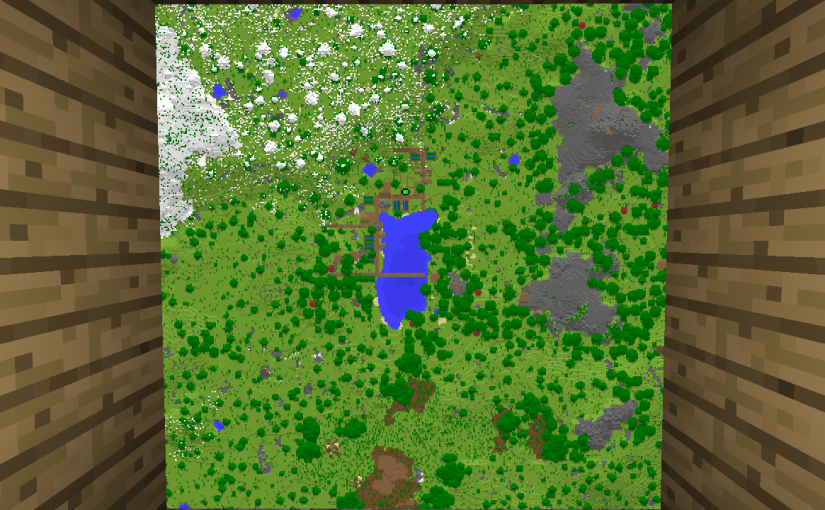 One big difference between a Minecraft gamer and Minecraft hobbyist is that the gamer lets the game define his objectives, while the hobbyist defines his own goals. In Minecraft, the gamer defeats the Ender Dragon, and later takes down a Wither, and then, bored, moves on to another game.

The Minecraft hobbyist, however, has his own goals. They may be as simple as creating a cute little farm, or as grand as building an entire empire. They may be focused on redstone automation, or capturing and displaying mobs, or creative builds. The hobbyist may even dive in and change the game to better suit their style using mods, texture packs, or command blocks.

As with anything in life, having your own goals is never quite enough. I had the vision to create a pigman empire for over a year before finally tackling it head on with New Lusitania. It wasn’t until I had clarified that vision into something exciting that I felt like I could really make it happen.

But even an exciting vision isn’t enough. I also needed to break it down. It was humbling after a month of smaller projects on the ChickenPieCraft server when I realized I needed to spend some time scouting out locations. I had this grand vision for New Lusitania, but I had to get down to actionable steps that could be done one at a time. If I didn’t scout out locations, I would never get to the point where I could build a palace, or populate the empire, or start a mine, or any of the things I wanted the pigmen to do.

I’m going to go through this process of clarifying a vision and figuring out the next step(s) for my involvement in MCImmersion out loud here on my blog. It might get a little messy. First, I want to consider factors that will affect the vision I have.

BiomeBundle: Because this world has terrain from BiomeBundle, it has a different feel than vanilla. There are a ton of structures built into the terrain, and I don’t want what I build to feel out of place.

UHC: Because this world is hardcore, with a thirty minute death ban, I’ll be playing safer than I would in vanilla Minecraft. That’s cool, I like the challenge. But because that’s part of the challenge, my vision needs to account for that, and be scaled back accordingly. It may also make sense to have a vision that integrates the UHC component – like using each life in the world to tackle a different project.

Smaller projects: Because I’m doing this as a break from New Lusitania, it’s going to be smaller in scale. I don’t want to give up on New Lusitania, so I need to come back in a reasonable amount of time.

No Dynmap: In ChickenPieCraft, we have an overview map that makes it easier to plan out large scale projects and get a feel for where everyone on the server is and how to find them. Without that, some new project possibilities open up. Becoming the cartographer for the server is one of those, where I would map things out, and help people find each other and build paths between others’ bases.

Village/Lake/Nearby Priest/Snowy Mountains: I’ve since left my first temporary base, explored a bunch more, and resettled in a small village on a lake near some snowy mountains. It’s pretty, and there are certainly some natural projects that offer themselves up: protect and remodel the village, setup villager trading in a market, etc.

Self imposed challenges (http://gibraltar.rockhymas.com/iberia-self-imposed-challenges-through-death-with-consequences). I’ve used self imposed challenges in the past to give myself a progression to work through. I may revisit my simple, “one chest in my base, all other chests have custom structures built around what they store” challenge. It forces me to build more and flesh out a realistic community just so I can keep all of the interesting materials available.

As I wrote the last few paragraphs up, the process of looking at things that will constrain my vision naturally got my brain thinking about some ideas that appealed to me.

One was the idea of creating a small Bavarian style village on the lake. I could use my self imposed challenge to make sure the village is teeming with life and activity.

I also like the idea of becoming an itinerant cartographer on the server. I would still need a base of operations, but my lake village doesn’t make sense for that. It would be something more hermit-esque, focused on providing the needed mapmaking materials (paper, iron, redstone, horses, boats) and possibly have a very academic/philosopher vibe to it.

A third idea would be to focus on villager trading. In all my Minecraft play I’ve never built a proper villager trading area. I could focus on making this town on the lake into a mercantile outpost where travelers come from far and wide to ply their wares and purchase what they need.

That’s all the ideas I’ll need. After writing them up, I spent some time looking into inspiration for each one. What do Bavarian forest villages look like? Google image search! What famous mapmakers could I model my Minecraft life after? Marco Polo! Ferdinand Magellan! Lewis and Clark! How would I go about setting up villager trading? Youtube Minecraft videos to the rescue! Don’t forget to check the trading page on the Minecraft wiki!

Making a Choice, Fleshing it Out

Ok, after doing my investigation and thinking through the options, I like the idea of creating a village on the lake that is focused on villager trading. So I’ll need to make a villager breeder, and set up locations for villagers to trade. Rather than just build a big hall for trading, which seems to be a common solution, I want to instead flesh out a real village with separate structures built around each villager profession. That’s twelve separate areas to build, which will take some time in a UHC world:

It’s clear that some supporting buildings could be created as well. Besides those listed above, it makes sense to build an iron foundry and a diamond cutter near the armory, tool shop, and weapon shop. Also, some of these could be combined into larger builds. Placing the church, library, and map room into a larger religious university area or castle would be really cool.

Finally, you should make your vision something you can see. For me, that means picking a visual theme for your builds. Will you go with a classic medieval european style? If so, more Germanic, more English, or more Italian? Maybe you want to do a Chinese or Japanese themed build? For my trading village on the lake, I decided to go with a brick and cement building style reminiscent of small Spanish villages. I spent a few minutes in creative mode mocking up a facade to flesh out what materials I want to use (concrete, concrete powder, bricks, dark oak wood). It didn’t take much, but it gives me a palette for my builds to start from. 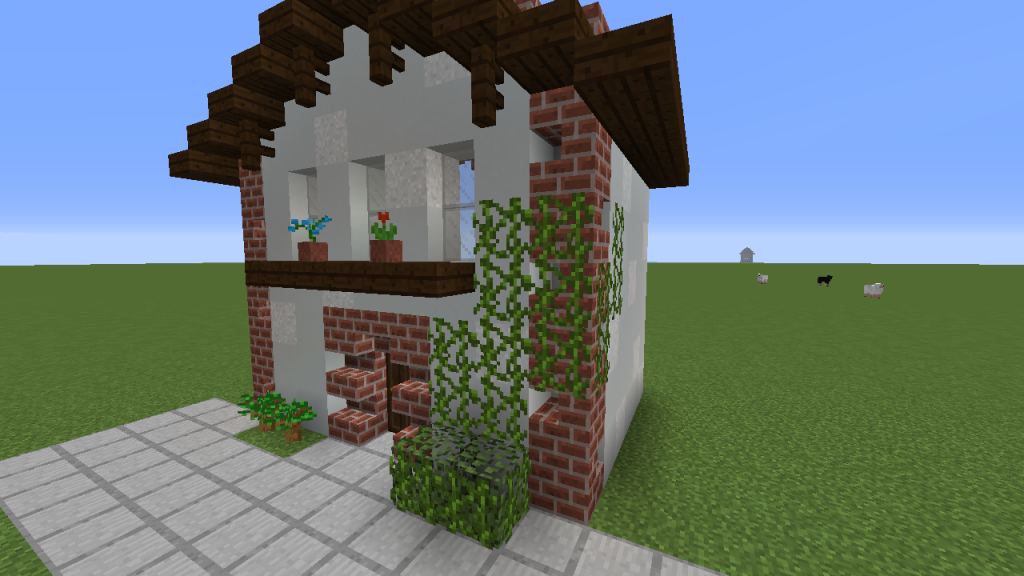 To make it more specific, and to emotionally connect with the vision, I’m going to name the village. The pictures that inspired my building style all came from small Spanish villages in the Navarre province. So I’m going to name my village Navarre. It also fits with my theme of taking names from the Iberian peninsula (Iberia, Lusitania, Gibraltar).

What’s the Next Step?

The catchphrase for the MCImmersion server is “Survive. Thrive. UltraHardCore.” In terms of next steps, I first have to survive, before I can worry about thriving.

Since I keep getting hurt I will need a steady supply of healing potions or golden apples. So my next steps for survival is to get to the nether so that I can get basic potion making supplies. To do that, I really need to stock up on arrows and do some enchanting of my armor and weapons. I have some experience, and a bunch of lapis already, but only enough diamonds to get the enchanting table. So I’ll likely go into the nether in iron armor. That gives me my marching orders for the next few Minecraft days of play.

To truly thrive and make progress towards my vision, there are other next steps I can take beyond just making sure I stay alive. I can explore and map out the area around my lakeside village (see map picture above). I have a lot to build, and it won’t happen unless I plot out a city with zones for the different buildings. I’ll also want to protect the larger area by lighting it up and putting up a city wall that can be upgraded as I become more wealthy.

So, here’s the deal. When I started writing this blog post, I really didn’t know what I wanted to do. Now, I have a plan, I have a vision, and I know what comes next. Life is good.