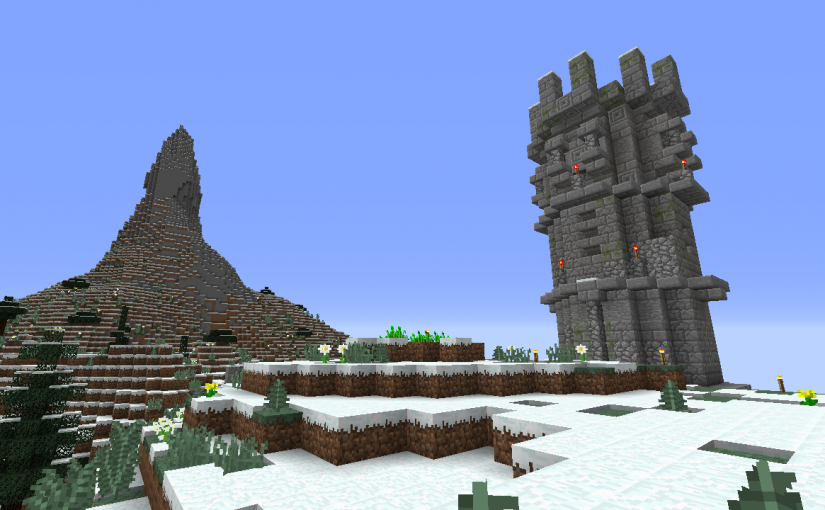 So, as an initial break from New Lusitania, I decided to see if I could find a Biome Bundle server to play on. The first one I came across had terrain from Biome Bundle, but is also set to be UHC (Ultra Hardcore), which means that it’s hard mode, plus health regen is turned off. That means no health regeneration unless you use potions or golden apples. Since that is also up my alley, I jumped at the chance to check it out.

After applying, I got whitelisted, and spent my first few Minecraft days on the server. So far, no deaths, but I did lose three and a half hearts, thanks to a skeleton who shot me in a cave entrance. Mostly, I’ve been exploring, trying to find a nice spot to settle down. As expected, the Biome Bundle terrain is beautiful. While I’ve followed BB for a while now, I haven’t actually played in a world, so it was fun to encounter new biomes that I’ve never seen on the BB website. It continues to amaze me how much depth there is.

Although the latest BiomeBundle now has vanilla ore generation, earlier versions, including the one used in MCImmersion, don’t. In these, ores generate in a more spread out distribution, which means you can find all of the good stuff on the surface, or anywhere between it and bedrock. I personally don’t like this as much. Though I do think it makes caving and exploring more interesting, it also makes any type of systematic mining less interesting. There is no real strategy to mining. We’ll see how I feel about it after playing in the world for a while.

I have chosen an initial base of operations, in an abandoned watchtower, a structure that’s part of BiomeBundle. It’s quite far from spawn, though I know some areas near it have been explored by other players. I doubt it will become a permanent home, but it’s as fine a place as any to build up some materials and from which to explore the surrounding areas.

I’ve now played a couple times and had the chance to chat with both of the server owners/admins. They seem like great people and players, and I like the vision they have for the server, slowly building up a cadre of players who like to take Minecraft seriously, and like the challenge of ultra hardcore.

With both of them, I’ve mentioned Iberia, my own take on making Minecraft harder. One thing I’ve found, even in just a couple hours of play, is that BiomeBundle changes the challenge of hardcore. I’ve found enough gold on the surface and in the various structures I’ve encountered to craft three golden apples, which is great, as I’ve needed that many to fully heal from damage I’ve taken early game. As such, I’m not sure I’d want the sleep to heal benefit in Iberia if it were combined with BiomeBundle in a modpack. The server admins mentioned that they encourage new players to spread out by traveling a ways from spawn before settling down. That can be difficult when you start the game with the pressure of ultra hardcore looming over you, so I could see some real value in the natural dispersion that occurs for players in Iberia. Add to that the further dispersion that will happen as they die and respawn anew somewhere else, and the whole dynamic of play changes radically. I haven’t had a chance to test that with enough players to really know what the experience is like, but my hope would be that the work to build up individual bases and then slowly expand and explore to find other players would be a really cool way to build a community.

So, this is my first new adventure while taking a break from New Lusitania.