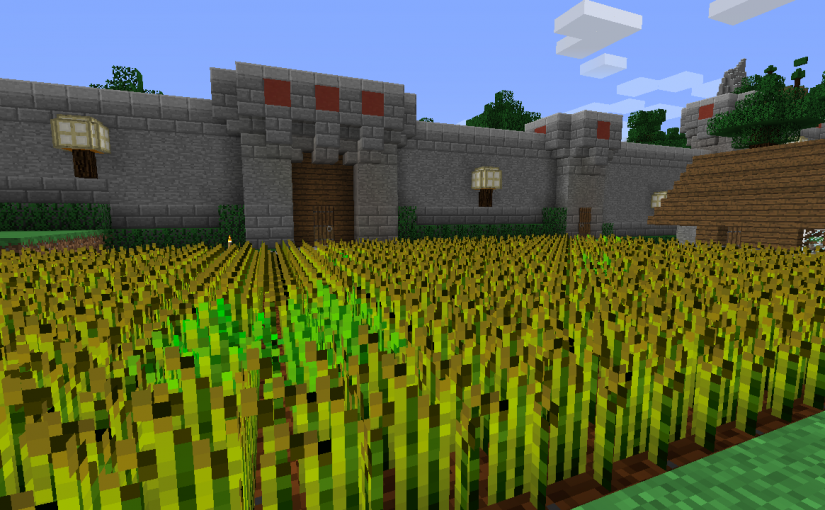 The first release of Iberia was not designed with the multiplayer experience in mind. Many of the original challenges just didn’t make sense when you tried to play multiplayer. Sleep to Heal is great in a single player world, but in multiplayer it can be difficult to get everyone to sleep so that you can heal. Find Your Way is a nice challenge, but really only worked because the world spawn was continuously moving, so compasses would point to your last respawn point. If that happened in a multiplayer world anybody could just go find the latest player to die by following their compasses and bring them back to civilization. So that wrecked Death With Consequences, which didn’t really extend to multiple players on it’s own anyway. At least hard stone and armor slowing crafting are fundamentally single player in a way that still works fine with multiplayer.

So, Iberia 2 is all about designing something that makes sense when you’re playing with friends. Except for hard stone, all of the challenges have been rethought.

Before I dig into the details, though, here’s an awesome mod review that JSQ made:

Let’s get armor out of the way first. Iberian armor is now more than just an annoyance when trying to craft or open chests. That drawback has been toned back to fit into a bigger story: armor has purposes in Iberia 2, which will give you a reason to wear types of armor other than just iron (early game) and diamond (late game).

Leather armor is a great all around armor without any drawbacks, except that it offers fairly light protection. On the opposite end of the spectrum is diamond armor. In addition to slowing crafting access (but not chest access), diamond armor will slow you down when using axes, pickaxes, and shovels, it will make you trample crops when walking on them, and prevent you from placing blocks when jumping or falling.

Iron only has some of these drawbacks, and chain has even less, giving you a reason beyond aesthetics to wear chain armor.

Finally, gold armor is ceremonial. As such, it slows you down. But it’s also necessary to unlock enchantment levels above 22. Each piece of golden armor you’re wearing will unlock 2 more enchantment levels, up to the max of 30.

None of that is specifically multiplayer, but armor needed a reworking from Iberia 1.

So now, to the multiplayer aspects of Iberia 2. It’s impossible to talk seriously about sleep, healing, and navigation without first discussing spawn. In Iberia, everyone spawns separately. So, on a new server with Iberia, the first player to join will spawn one place, the next one 1000+ blocks away, the next one 1000+ blocks from there. Because the direction is always random, it’s very possible for two players to spawn near each other, but for the most part, when you join a server you won’t be near anyone. You’ll be alone.

This immediately adds a new objective to the game. Alongside building a base, enchanting your armor, defeating the Ender Dragon, and getting a beacon, you can now work to explore your world to find others. In single player Iberia, the only reason to do that was to find your old bases. And you’ll still respawn in a completely new place when you die, giving you a completely new start. But in multiplayer, you also explore to find other players. You have a reason to explore beyond just finding a few rare biomes or trying to find the perfect location for a base. Now you could stumble upon the amazing build of another player, or maybe just a small early game hut. The world now has variety that is only limited by how many players there are and what those players can build. And it’s all out there to find once you go exploring.

Which brings us to the next challenge: navigation. In Iberia, the F3 debug screen doesn’t show your coordinates, so you cannot find your way using that. You’ll need to build waypoints, use compasses and maps, or have a really good spatial memory. Compasses in Iberia are special in that they point to the personal spawn point of the user who crafted them. So you can build compasses and share them with others and they’ll be able to find your place.

Next up: sleep. Nobody likes sleep in multiplayer, because everyone currently playing has to sleep at the same time, which is a pain. So the first change to sleep in Iberia is to make it so that all players have to sleep, but not necessarily at the same time. So if Alice and Bob are playing and night comes, Alice can go to sleep, wait till she’s fully asleep, and then get out of bed. Later that night, when Bob decides to sleep, once he’s fully asleep he’ll wake up and the world time will switch to day. You’ll still have to wait for the other players to sleep for night to turn to day, but you don’t need to wait around in your bed till everyone sleeps at the same time.

But that’s not a challenge. The challenge is that you may have a sleepless night. If your bed is not protected, there is a good chance you’ll wake up in the middle of the night to the sounds of zombies. You can protect your bed by covering it and the surrounding blocks, so the sky isn’t visible, and then lighting up the surrounding area. In multiplayer, if anyone wakes in the middle of the night everyone does. Consider that even further incentive to protect your bed.

Finally, natural regeneration is turned off. As in Iberia 1, you can heal by sleeping. Due to the nature of multiplayer sleep, the healing will happen when you get out of bed, even if day doesn’t come immediately. The default amount you heal has also been balanced upwards a little bit.

That’s it for Iberia 2. I’m starting a server with my sons to playtest all the new multiplayer stuff, and make sure things feel balanced. In the meantime, feel free to check out the release, and let me know what works, what doesn’t, and what new challenges you’d like to see.